Tens of thousands of Jacaranda trees have once again, as they do religiously this time of the year, bloomed all over Pretoria and turned the face of the city purple. It is estimated that there are almost 70 000 Jacarandas grown around this city’s many streets, parks and gardens which bloom from late September to early December, leading to the city coining the name “the Jacaranda City”.

Jacarandas are not indigenous to South Africa and are believed to have been imported from Brazil to South Africa in 1829. Some of the oldest Jacarandas in Pretoria can be found around Bosman and Cilliers Streets, where some of the first Jacaranda trees in the city were planted. There is also a claim that the biggest and oldest Jacaranda in Pretoria can be found on the corner of Eastwood and Stanza Bopape (old Church Street). If you are on one of the northern viewpoints of Klapperkop, you will also be able to spot a line of white trees along the foot of Klapperkop’s northern slope. This is Herbert Baker Street in Groenkloof, which has a row of almost 100 white trees. These trees are also Jacarandas, but have a pure white flower instead of a purple one. They are said to be sterile and are a cultivar of the main species. 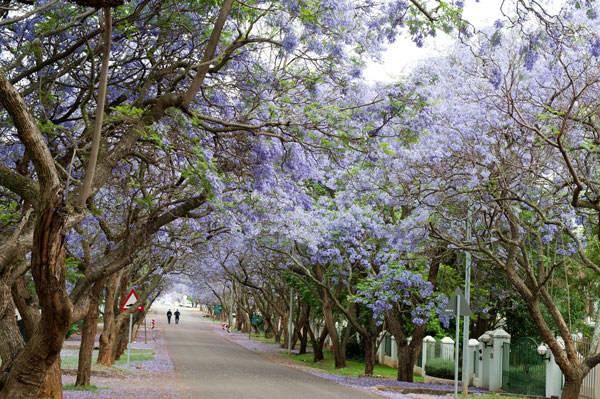 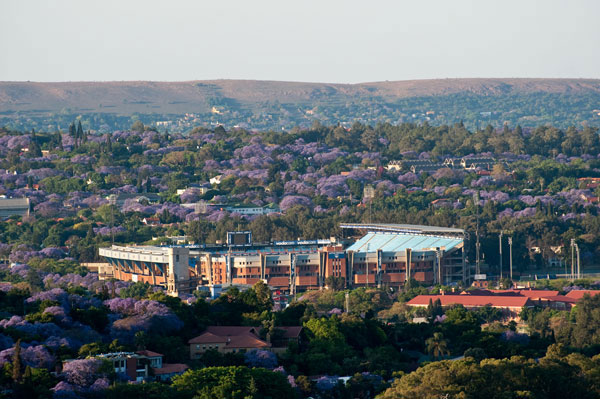 If you want to maximise on the Jacaranda-viewing experience, why not park at the Union Buildings and take a stroll east of the buildings along Government Avenue. This street is one of the few, if not only, places in Pretoria where each pavement has a double row of Jacarandas. The reason for this are that they were to provide shade for government officials walking to the Union Buildings from Bryntirion Estate. Another option for Jacaranda viewing would be to take a slow drive through Arcadia, past Loftus stadium and through Sunnyside and Brooklyn where many of the streets form a closed canopy of purple.

Pretoria’s residents (and visitors alike) love the Jacarandas and students from the universities in the city have a belief that if you are studying for your final year exams and a blossom falls on your head, it means you will pass your exams with flying colours. So why not visit the City of Tshwane this time of the year to have your own unique experience of this “Jacaranda phenomenon”.